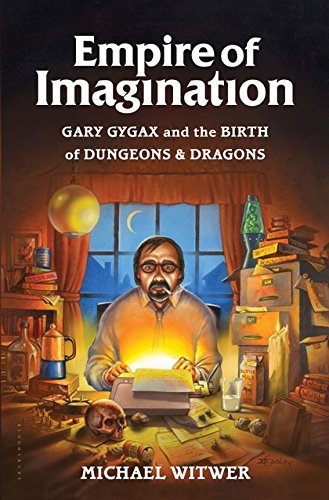 The life story of Gary Gygax, godfather of all fantasy adventure games, has been told only in bits and pieces. Michael Witwer has written a dynamic, dramatized biography of Gygax from his childhood in Lake Geneva, Wisconsin to his untimely death in 2008.

Gygax’s magnum opus, Dungeons & Dragons, would explode in popularity throughout the 1970s and ’80s and irreversibly alter the world of gaming. D&D is the best-known, best-selling role-playing game of all time, and it boasts an elite class of alumni–Stephen Colbert, Robin Williams, and Junot Diaz all have spoken openly about their experience with the game as teenagers, and some credit it as the workshop where their nascent imaginations were fostered.

Gygax’s involvement in the industry lasted long after his dramatic and involuntary departure from D&D’s parent company, TSR, and his footprint can be seen in the genre he is largely responsible for creating. But as Witwer shows, perhaps the most compelling facet of his life and work was his unwavering commitment to the power of creativity in the face of myriad sources of adversity, whether cultural, economic, or personal. Through his creation of the role-playing genre, Gygax gave two generations of gamers the tools to invent characters and entire worlds in their minds. Told in narrative-driven and dramatic fashion, Witwer has written an engaging chronicle of the life and legacy of this emperor of the imagination.